The Bone Keeper by Luca Veste

He’ll snatch you up.

And make you weep. 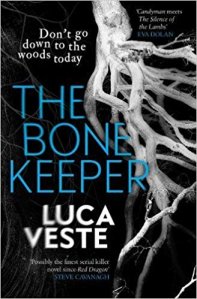 Everybody knows the tale of The Bone Keeper, but is it a ploy by parents to keep their children from playing in the woods or is there an element of truth? Detective Constable Louise Henderson certainly knows the story and now bodies are being discovered in local woodland. Could this be the work of the mythical serial killer? After burying the memories of her past, she must now face the fears of her childhood and go into the woods…

As a fan of Luca Veste’s previous books, The Bone Killer has been on my radar for quite a while and there’s has been a fair bit of buzz surrounding it as the publication date drew nearer. After attending the book launch at Waterstones Liverpool, I couldn’t wait to sink my teeth into it, and see if it was as good as all of the glowing reviews said it was. After reading it in two sittings, I was definitely not disappointed!

The Bone Keeper grabs you right from the start when we are introduced to the legend by four children who are playing near a tunnel where the malevolent spirit is said to reside. Of course, things are destined to go wrong, with four children going into the tunnel but only three exiting. Has Matty been taken? Fast forward two decades and a woman has been found near a forest, severely injured, singing the song about The Bone Keeper that all local children have grown up knowing. With the police refusing to attribute the attack to the mythical creature, Detective Louise Henderson is a bit more accommodating, suspecting that there is more to the victim’s story than meets the eye.

Louise Henderson is a brilliant protagonist who is clearly blocking out something from her past. Even though I predicted part of what had happened, Luca Veste does a great job in showing parallels between her and Caroline, the victim, so that the waters are well and truly muddied. I had so many theories but was conflicted as to which character they applied to! This made for a very tight and satisfying plot with numerous twists and turns along the way.

The Bone Keeper is a very atmospheric read and many of the scenes are genuinely chilling. Due to his shadowiness, the titular character is probably one of the most eerie serial killers I have read about and I can fully understand why some people are saying they have been checking under their bed after reading this! I will certainly be having second thoughts about walking through the woods of Merseyside!

While I have definitely missed Murphy and Rossi, the main characters from Luca Veste’s previous books, Louise Henderson is a very worthy protagonist and is one that I hope we see much more of.

If you haven’t read any of Luca’s books before, you won’t regret starting with this one. Just make sure you keep the lights on…