May has been a ridiculously busy month for me so I haven’t done hardly as much reading as I had anticipated. I’m hoping June will be a bit more fruitful!

Books I Have Read

My Mother’s Secret by Sanjida Kay

It’s amazing how one single event can completely alter the course of your life. This is what happens to Lizzie when she witnesses a horrific act and her life is thrown into disarray. An excellent, twisty book telling how the past can’t always stay hidden.

The second book in the Kelly Porter series of police procedurals sees the detective investigating a serial killer with a specific calling card in the idyllic setting of the Lake District. This is looking like being a great series!

Although this is aimed at 9-12 year-olds, this is a fascinating true story of a bear cub who became part of the Polish army during World War Two. A heart-warming and emotive story which I will review as part of the upcoming blog tour.

The Night Caller by David Field

The second in the Esther and Jack Enright series set in Victorian London sees the couple investigating the attacks of women in the East End. If you are a fan of easy-to-read historical crime, this series is for you!

Books I Have Acquired

‘To your knowledge, is there anything that would preclude you from serving on this jury?’

Murder wasn’t the hard part. It was just the start of the game.

Joshua Kane has been preparing for this moment his whole life. He’s done it before. But this is the big one.

This is the murder trial of the century. And Kane has killed to get the best seat in the house.

But there’s someone on his tail. Someone who suspects that the killer isn’t the man on trial.

Kane knows time is running out – he just needs to get to the conviction without being discovered.

Gregory Norwood, wealthy businessman and close friend of Minnesota’s leading candidate for Governor, is found dead on the first anniversary of his son’s drug overdose. It seems clear to Detectives Gino and Magozzi that grief drove him to suicide.

Until they realise the left-handed man seems to have used his right hand to pull the trigger.

And they find the second body.

As the seemingly open-and-shut case becomes a murder enquiry, the detectives begin to delve into the dark secrets of one of the city’s most powerful families. It seems the murders are not the first in the Norwoods’ tragic story – and they won’t be the last . . . 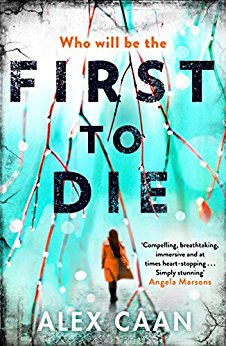 SOMEWHERE IN THE CROWD IS A KILLER

Bonfire Night and St James’s Park is filled with thousands of Anonymous protesters in a stand-off with the police. When a cloaked, Guido Fawkes mask-wearing body is discovered the following morning, Kate Riley and Zain Harris from the Police Crime Commissioner’s office are called in.

The corpse has been eaten away by a potentially lethal and highly contagious virus. The autopsy reveals the victim was a senior civil servant, whose work in international development involved saving lives. Why would anyone want him dead?

THEY WILL STRIKE AGAIN

As the research team looking into the origins of the deadly virus scramble to discover an antidote, first one, then another pharmacist goes missing. Meanwhile, a dark truth starts to emerge about the murder victim: he was an aggressive man, whose bullying behaviour resulted in the suicide attempt of one of his former staff members.

With thirty lives potentially at stake, Kate and Zain have their work cut out for them. Can they find the two missing pharmacists in time, or will they too end up dead?

I’ve got my fingers crossed for a couple of books I’ve requested on Net Galley but I’m probably most looking forward to the new Mark Billingham book, The Killing Habit, which is published on 14th June – Tom Thorne is definitely one of my favourite fictional characters.

The Night Caller by David Field

The women in the East End of London have just got over the horrors of Jack the Ripper when a new attacker appears on the scene – someone is breaking into their homes, stealing their underwear and leaving filthy, threatening messages. With the police refusing to take the crimes seriously, it is up to Esther Jacobs and her fiance, police officer Jack Enright, to investigate the wrongdoings. Are these women being targeted for a reason and just what is the connection to a new female ‘Alliance’? When the case takes a turn for the worse, someone will soon find their life is in grave danger…

The Night Caller is the second of the Esther and Jack Enright Mysteries, a detective series set in Victorian London, the first being The Gaslight Stalker. In the last book, our heroes met and, despite the horrendous circumstances they found themselves in, fell in love. Now planning their wedding, they find themselves involved in a case which becomes a little too close for comfort for Esther. Knowing Esther’s personality, it was not a surprise that she should find herself becoming involved in a female trade union and it was pleasing to see some historical fact being included such as the Bryant and May strike and the role of Annie Besant.

I found much of this book pitying Jack who has spent most of his life with his overbearing mother and is now embarking on a marriage with an equally strong woman. Esther appeared, at times, to be quite unlikable, but I found myself warming to her as the story progressed. It will be interesting to see what the next book has in store for Esther, as she is definitely not the sort of woman to be content with staying at home, looking after any children they have!

The Night Caller definitely transports you back to Victorian London and whereas, in the last book, we saw how the poorest and most unfortunate lived, here we see the lower classes finally trying to fight their way out of poverty. Of course, this would not be what everyone wanted and so we see these women being threatened and, eventually murdered. The mystery was a good one with enough red herrings thrown in to keep you off the scent, and it also had a satisfying conclusion.

I look forward to seeing how married life is treating the Enrights in the next book!

With thanks to Caoimhe O’Brien at Sapere Books for my copy of the book.