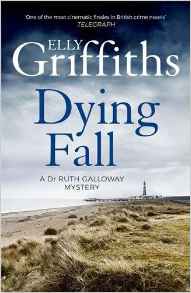 Ordinarily, Ruth Galloway would be excited to receive a letter from an old university friend detailing news of a fascinating archaeological discovery. Unfortunately, the letter has arrived the day after the writer’s death, killed in a suspicious house fire in the north-west of England. After receiving threatening texts warning to her to stay away from the dig, forensic archaeologist Ruth wrestles with her conscience and finally decides to head up to Ribchester to see exactly what Dan Golding had discovered and why someone is determined to stop her finding out. Ruth’s visit coincides with DCI Harry Nelson’s trip back home to Blackpool so, inevitably, he is drawn into the case. This time, however, the stakes are high and someone very close to Ruth may find themselves in mortal danger…

Dying Fall is the fifth book in the series and we see Ruth and Nelson out of the confines of Norfolk, instead heading to the northern towns of Ribchester, Fleetwood and Blackpool. As someone who knows Blackpool fairly well, I found Nelson’s take on his hometown very realistic but also understood Kate’s excitement at seeing Blackpool Pleasure Beach with its child-friendly Nickleodeon Land! Elly Griffiths’ writing always makes me want to explore new places – in this case, Pendle looks looks like a fascinating place to visit!

This book is not as fast-paced as the previous books but, instead is a slow-burner culminating in a nail-biting climax at Blackpool Pleasure Beach. There are many themes running throughout the story, as the author deals with the likes of racism and the supernatural, and it is interesting to see how the different characters interpret things in their own ways.

It is definitely recommended that you read the other books in the series before this one in order to fully appreciate the plot and character development. Another great read and I am looking forward to reading the next instalment.