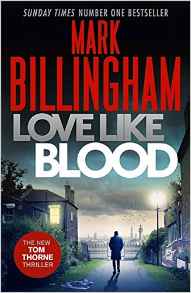 When DI Nicola Tanner’s partner is killed at her own home, she enlists the help of DI Tom Thorne to catch the culprits. Convinced that the murder has occurred as the result of a case Tanner has been working on, Thorne soon finds himself drawn into the disturbing world of honour killings as he embarks on a hunt for a pair of contract killers who he suspects have killed before.

Love Like Blood is the fourteenth of Mark Billingham’s Tom Thorne books, a series that is showing no sign of losing its touch. Never one to shy away from emotive issues, Billingham deals with probably the most controversial to date with the subject of honour killings. We find out quite early on in the story that the perpetrators are mercenaries who, with the aid of a go-between, are killing and disposing of people whose families feel have brought shame upon them. This potentially explosive topic is dealt with in a sensitive manner and the author has obviously done extensive research on the subject, drawing his inspiration from the real-life murder of Banaz Mahmod in 2006.

In Nicola Tanner, we have a worthy accomplice for Thorne – a woman who, despite threats on her life, will stop at nothing to bring the perpetrators to justice. I had to admire her tenacity, even if at times I feared for her safety! For me, though, the best relationship throughout the Thorne series is the one he shares with the tattooed, pierced pathologist, Phil Hendricks – two men who, on the surface, appear to have nothing in common but who are the best of friends. It was interesting to see how well Tanner and Hendricks got on and hope that we get to see more of Nicola Tanner in future books.

There are several twists in the story that make you cast doubt on some of the characters, keeping you interested right until the end, making this a highly recommended book.

With thanks to Net Galley and Grove Atlantic for the ARC.