The Killer on the Wall by Emma Kavanagh 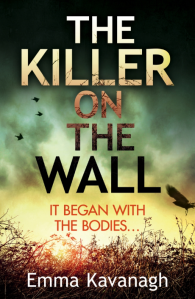 Finding a dead body is certainly a shock so finding three must be truly horrendous! That is what happened to fifteen-year-old Isla Bell when she discovered the remains of three people propped up against Hadrian’s Wall. Fast forward twenty years and Isla is working in forensic psychology, studying the minds of serial killers and , in the course of her work, has come fact to face with the man convicted of those killings. Then the killings start again. Everyone in the town is a suspect but who exactly is the Killer on the Wall?

I was drawn to this book immediately after reading the blurb and couldn’t wait to read it. There is definitely a touch of the macabre about bodies being posed after death and so it sounded like it was going to be a thrilling read. Initially, I found The Killer on the Wall quite difficult to get into and I found myself skipping through the parts where Isla was carrying out the tests on the convicted murderer. Although this part of the story plays a big part in the plot, this was definitely my least favourite part.

Once the first body of the second wave of killings is discovered, the pace really picked up and I began to enjoy the book a lot more. Although the blurb leads you to believe that this book is going to be about Isla, I found the character of Mina, the police officer, much more appealing. I really admired her tenacity although was worried that she was going to end up as the next victim!

In a town where everyone could be a suspect, there are a lot of red herrings thrown in to add to the confusion as to who the killer could be. Throughout my reading of the book, I did have two potential suspects in mind and one of those did turn out to be the culprit.

In all, I did enjoy most of this book, but I had hoped for a lot more.

With thanks to Random House UK, Cornerstone and Net Galley for the ARC.