**COVER REVEAL** A Spoonful of Murder by J M Hall

Retirement can be murder…

Once a week, three retired school teachers have their ‘coffee o’clock’ sessions at the Thirsk Garden Centre café.

But one fateful Thursday morning, they bump into their ex-colleague, Topsy, during their weekly coffee and catch-up. By the next Thursday, Topsy’s dead.

The last thing Liz, Thelma and Pat imagined was that they would become embroiled in a murder.

Today, I’m really pleased to be taking part in the cover reveal for The Serial Killer’s Wife by Alice Hunter. I love the sound of this book and if it piques your interest too, I’ve included a pre-order link.

So addictive it should come with a warning… ⚠

So twisted it’ll keep you up all night… 👀

The Serial Killer’s Wife by Alice Hunter is available to pre-order now. Out 27th May. #DidSheKnow?

With thanks to Ellie Pilcher and Harper Collins.

**COVER REVEAL** The Mystery of Montague House by Emma Davies

I am happy to be taking part in today’s cover reveal for the new book by Emma Davies, The Mystery of Montague House. This looks like a great read!

After a varied career, Emma Davies once worked for a design studio where she was asked to provide a fun and humorous (and not necessarily true) anecdote for their website. She wrote the following: ‘I am a bestselling novelist currently masquerading as a thirty-something mother of three.’ Well the job in the design studio didn’t work out but she’s now a fifty-something mother of three and is happy to report the rest of her dream came true.

After many years as a finance manager she now writes full time, and is far happier playing with words than numbers. She lives with her husband and three children in rural Shropshire where she writes in all the gaps in between real life.

With thanks to Rachel’s Random Resources for organising the cover reveal.

I’m really pleased to be able to share with you the cover for The Open House, the latest book from Sam Carrington which is published by Avon on 10th December. This looks like a fantastic read and the blurb has already piqued my interest!

Everyone’s welcome. But not everyone leaves…

Nick and Amber Miller are splitting up and selling their Devon family home. But despite the desirable location, the house isn’t moving. Not a single viewing so far.

When their estate agent suggests an open house event, Amber agrees, even as she worries about their gossiping neighbours attending and snooping around their home.

But Amber has more to worry about than nosy neighbours. Because thirteen people enter her house that afternoon, and only twelve leave.

Someone doesn’t want the house to sell, and is willing to do anything to stop it…

With thanks to Ellie Pilcher and Avon. 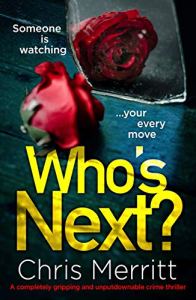 I’m really please to be taking part in the cover reveal for Chris Merrit’s latest book, Who’s Next?, which will be published by Bookouture on September 11th. If this looks like your sort of book, it can be pre-ordered here: Pre-order link

Hello! I’m a British author whose crime thrillers combine psychology, suspense, and characters you care about.

All my novels are set in London, where I live. My first trilogy starred Zac Boateng and Kat Jones, two detectives motivated by family, who tackle organised crime and police corruption. LAST WITNESS, the second Boateng and Jones book, reached #13 in the UK Kindle chart in 2019.

My second series features detective Dan Lockhart – an ex-soldier with a missing wife – and psychologist Dr Lexi Green, an American living in London. These novels are darker, more psychological serial-killer cases, with romantic relationships as a central theme.

I began writing fiction in 2014, after previous careers as a diplomat, based in Iraq and Jerusalem, and later as a psychologist working with victims and perpetrators of crime. I specialised in treating Post-Traumatic Stress Disorder (PTSD), which sparked my interest in telling stories about how people cope when faced with extreme adversity.

Now, I spend most of my time writing novels and drinking coffee while *thinking* about writing novels. When I’m not writing, I love climbing and playing basketball.

Stumbling to the ground, he claws at the earth around him, trying to stabilise himself, but his attacker is on him in seconds. As he stares at the lights of the bustling streets on the other side of the park gates, he doesn’t even have time to yell for help before everything goes black.

When the body of wealthy businessman Charles Stott is found dead on Wimbledon Common, covered in bruises just feet away from his luxury home, Detective Dan Lockhart is called to investigate the shocking scene. Examining the sickeningly disfigured body before him, Lockhart knows he’s dealing with a brutal killer and, as he bends down to take a closer look, he notices something on the victim’s neck: a small, crudely drawn symbol in black ink. It seems the murderer has marked his victim, but why? Dan needs to get inside the perpetrator’s mind, so he contacts psychologist Dr Lexi Green.

As the ensuing media circus puts pressure on Dan and Lexi’s investigation, another victim is found and the headlines are quick to report a serial killer is on the loose. The body of a successful lawyer has been discovered in a park with the same purple bruising and hand-drawn symbol on his neck. Dan fears that more victims will follow.

As the case intensifies, Dan uncovers a new lead on his missing wife, Jess, who disappeared eleven years ago. Determined to follow it up, he must choose between tracking down a serial murderer and finding Jess. Can he make the impossible decision before the killer strikes once more?

Fans of Angela Marsons, Rachel Abbott and Cara Hunter will love this thrilling new series from Chris Merritt. From an explosive start to a heart-stopping finale, you will not want to put this book down!

This year has been very strange, and it’s about to become stranger. It’s time for #ChristmasInJuly!
As the snow begins to fall, the body count begins to climb…
Pre-order your copy of The Christmas Killer by Alex Pine for only 99p! Out 29th Oct. ☃️
https://www.amazon.co.uk/Christmas-Killer-chilling-detective-thriller-ebook/dp/B0875VC5W7/ref=sr_1_1?dchild=1&keywords=The+christmas+Killer&qid=1592387646&s=digital-text&sr=1-1
July 1, 2020 0

**COVER REVEAL** Daisy on the Outer Line by Ross Sayers

Two of my favourite TV shows in fairly recent years have been Ashes to Ashes and Life in Mars and so my interest was immediately piqued when I read the blurb for Daisy on the Outer Line by Ross Sayers. Time travel is a fascinating concept and I really like the sound of this plot.

Life, Death and Time Travel on the Glasgow Subway…

When selfish student Daisy trashes her stepdad’s funeral, she gets blind drunk and wakes up on the Glasgow subway to find she has travelled back in time. To make amends for her behaviour, she must save a life—but she doesn’t know who, how, or where to begin. She’ll have to find out fast if she wants to make it back to her old life and avoid being trapped in the wrong timeline forever.

Daisy on the Outer Line will be published by Cranachan Books on 5th November 2020.

With thanks to Kelly from Love Books Group.

One of my favourite crime series in recent years has been the D I Kelly Porter series by Rachel Lynch. Set in the Lake District, these books are a great read and the latest, Little Doubt, is, in my opinion, the best one yet. My review for this will be published in a few days, but in the meantime, I’m thrilled to be able to share the cover of the next in the series, Lost Cause, which will be published on 20th August 2020 by Canelo. This promises to be another great read.

Is he a victim? Or a killer?

Kevin Flint is a young man on the cusp of adulthood and something of a misfit. He has no friends and a reputation of being odd. At home he lives in fear of his cruel, controlling father. Kevin starts spending time at an abandoned church with an ancient graveyard, and learns couples also go there to have sex. He becomes obsessed with watching them. Soon, one of the women who he has followed is reported missing.

DI Kelly Porter investigates the disappearance and knows that the adolescent boy is hiding something. Kevin is culpable, but to what degree? The evidence against him begins to stack up and Kelly is torn between instinct and facts. Distracted by a looming crisis in her personal life, can she preserve what she loves and still uphold the laws she lives by?

Today I’m pleased to be one of the blogs taking part in the cover reveal for the first book in the Cape Mysteries series by Barbara Elle, Death in Vermilion.

Barbara Elle fell in love with books and writing at a young age, honing her writing as a copywriter at major publishers and as a freelance journalist. Growing up in Boston, her writing draws on people and places she remembers, setting the Cape Mysteries on Cape Cod, a place of memories.

A psychological thriller about murder among friends and enemies.

Who can you trust?

Leila Goodfriend is laying down the bones of a painting. When interrupted by Iris, the noisy, unlikeable artist in the studio upstairs, Leila is distracted and annoyed.

When she discovers the racket was actually Iris’ dead body hitting the floor, Leila becomes obsessed: Who murdered Iris?

The other Red Barn Cooperative artists — competitive, jealous and hypocritical — are prime suspects. They all hated Iris. “An artist owes his life to his art,” Iris said.

Iris was good for a laugh. But no one is laughing now.

In this gripping mystery, new author Barbara Elle paints a clever and twisted picture of women and sisters, whose lives are entwined by a brutal murder in a charming Cape Cod town.

With thanks to Kelly from Love Books Group