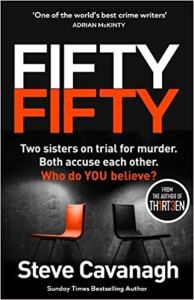 Steve Cavanagh has become the author with the killer hook and this has definitely continued in Fifty Fifty. From the very start, where we have two separate calls being made to the emergency services, from two sisters each accusing the other of murder, I was immediately drawn in to this twisty, sadistic tale of cat and mouse.

In Fifty Fifty, we have two defendants, each protesting their innocence and each represented by a lawyer who believes in what their client is telling them. One of them is being played, but who? Eddie Flynn is defending Sofia Avellino, a messed up young woman with a history of psychological trauma. Does she have it in her to carry out such a horrific crime? New lawyer Kate Brooks is representing Sofia’s sister, Alexandra, a woman much more together than her sister, but does her calm demeanor hide something more sinister? Usually when reading a book like this, I have some sort of theory as to who the guilty party is but I truly could not make up my mind! Just when I’d think it was definitely Alexandra, something would happen to lead me to believe it was Sofia, only a few chapters later have me convinced, yet again that it was Alexandra! I loved how this plot kept me on my toes, keeping me guessing right to the end.

There was one part of the book that had me holding my breath, desperate to read the next part yet, simultaneously, not daring to as I knew that something horrific was about to happen. I do not want to give away any spoilers, but this was a magnificent piece of writing and all I can say is Steve Cavanagh, how could you? If you’ve already read the book, you will know which part I am referring to, if not, strap yourself in as you’re in for a bumpy ride!

The author’s last book was called Twisted, and this one definitely follows suit. Fifty Fifty has a gripping plot that kept me on my toes throughout, outfoxing me at every turn. If you’ve never read a Steve Cavanagh book, you won’t go far wrong with this one. Superb!

With thanks to Orion and Net Galley for my ARC.