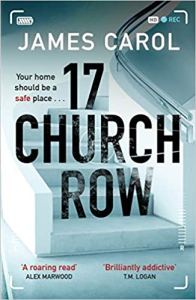 Life has never been the same for the Rhodes family since the tragedy that occurred three years ago. In a devastating road accident, four-year-old Grace was killed, leaving her twin sister, Bella, so traumatised that she has refused to speak ever since. In an attempt to finally move on, Nikki and Ethan Rhodes move into a state-of-the-art new property, designed by the celebrated architect, Catriona Fisher. The house, with its ultra-modern security systems should be exactly what they are looking for, but what if it isn’t the safe place they think it is?

Well, this book has certainly given me pause for thought! From the start, I could understand the internal conflict felt by Nikki: should she stay at the house that holds so many memories of her dead daughter or should she move to 17 Church Row, a house that could surely protect her remaining child? As someone who has vowed to do whatever it takes to ensure the safety of Bella, the new property seemed a no-brainer and, for a while, all seemed fine. As the story progressed, it soon became apparent that there was a malevolent force in action, but who was behind it and what was their motive?

I think the scariest part of this book was that that the family became so reliant upon ‘Alice’ an artificial intelligence system that makes Alexa seem almost neanderthal. We see Alice making more and more decisions for the family, controlling their lives in every way, to the point where you wonder how far she will actually go. I found it quite unnerving to think that this sort of technology probably isn’t too far off in the future and how we rely upon the internet to do so many things already. What if this goes wrong? What will happen to society?

Most of the story is told from the perspective of Nikki, but some chapters are written by an unknown character who becomes more unhinged as the plot develops. I liked how we weren’t told who this is until much later in the book, making me constantly wonder who this could be. I have read numerous books with cold, calculating narrators but this is probably the one who has perturbed me the most.

17 Church Row is one of those books that draws you in instantly and holds your attention until the very last page. A fast-paced, exciting read that will certainly make you question the use of technology!

With thanks to Readers First for my copy.