The Penmaker’s Wife by Steve Robinson 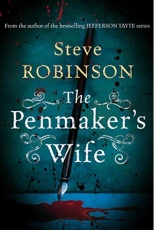 In 1880, young mother Angelica Chastain has fled her old life in London in the hope of starting again in Birmingham with her son, William. After successfully moving up the social ladder, she soon has the life she dreams of, and the hope of a comfortable future for her son. The past has a habit of catching up with you, however, and it is not long before faces she had hoped she had left behind resurface. When people close to her begin to question what her motives are, we begin to wonder just what Angelica will do to preserve the life she has become accustomed to.

Angelica was a very complex character. At the start of the book, when we read about why she is fleeing London, it is hard to have nothing but sympathy for her. Despite the peril of what she does, it is understandable that she is willing to do anything to save the life of her young son and I admired her for the risk she was prepared to take.

It was whilst on her journey to Birmingham that we first see a glimpse of the real woman behind the protective mother. Again, though, even though this is a shocking moment, I could see why she did what she did. Unfortunately for Angelica, she soon realises that there are far too many people who know about her past and that these unscrupulous characters are willing to exploit her in order to gain their silence. As the story progressed, I became more and more shocked by Angelica’s actions and began to fear for anyone she came into contact with!

There are several twists in the book as Angelica continues on her mission to give her, now grown up, son a good life. I did fear that one loose end would be left, but was pleased that the author had certainly not forgotten about it and that, despite what had happened, shocked that Angelica had not either!

I really enjoyed the late-Victorian setting and the contrast between the wealthy and the lower, criminal classes. Although Angelica wasn’t a nice character, she was certainly fascinating to read about!

With thanks to Net Galley and Amazon Publishing UK.