The Leaden Heart by Chris Nickson 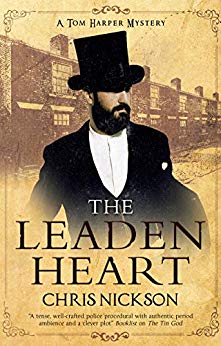 It’s July 1899 and the crime rate in Leeds has been unusually low. This all changes when Superintendent Tom Harper receives word of a particularly daring burglary at one of the city’s more expensive residences. Meanwhile, his ex-colleague, Billy Reed, is seeking some assistance after the suicide of his brother who was facing an extortionate rent increase. Investigation uncovers a web of corruption involving some of the area’s influential residents. Who are the ringleaders and will Harper be able to apprehend them before the death toll rises?

I’ve always enjoyed reading historical crime fiction, particularly those books set during the Victorian era. In the Tom Harper series, we are now reaching the end of the nineteenth century, a time which has seen great changes for the Leeds detectives. As in all of his books, Chris Nickson has created a very vivid picture of the time, creating characters that feel real and who you can certainly feel empathy for. Again, we see Tom’s wife, Annabelle, taking a central role in the plot, her new position as poor law guardian giving her a platform to help those unable to help themselves. Annabelle has always been my favourite character, her ongoing fight for women’s equality being a great theme running throughout the books. With her daughter, Mary, seemingly being a chip off the old block, I think we are in for some entertaining times ahead!

It was pleasing to see Tom and his old friend Billy attempting to build bridges as they investigated the reason behind the suicide of Billy’s brother. Although this was set over a hundred years ago, the story is all too familiar to many people nowadays with those in power preying upon the poor and less fortunate. It was easy to imagine Harper’s frustration as he faced brick walls when trying to uncover the identities of those involved, especially seeing as he was desperate to close the case for the sake of Billy. The crooks doing the dirty work, the Smith brothers, are a particularly nasty pair, leaving a trail of death and destruction wherever they go. I spent the whole book willing for their capture!

If you are new to the Tom Harper books, please don’t be put off by the fact that this is the seventh book in the series as it can definitely be read as a standalone. This is, without a shadow of a doubt, my favourite so far, and I eagerly anticipate what the next installment brings for Tom, Annabelle and the rest of the characters we have grown to love.

With thanks to Severn House Publishers and Net Galley for my copy.