The Body in the Mist by Nick Louth 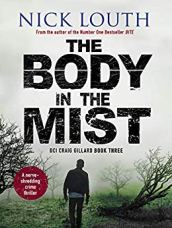 The body of a man is found on a quiet Exmoor Lane, seemingly the victim of a hit and run. With no clues to his identity and a severely damaged face, the police are finding it impossible to identify the deceased. Meanwhile, DCI Craig Gillard is called away to Devon on family business and finds himself embroiled in the case when the car involved in the hit and run is traced back to his aunt. As he digs deeper, Craig starts to uncover long-hidden family secrets which will have serious repercussions for his whole family…

There are dysfunctional families and then there is Craig Gillard’s family! Summoned to help his aunt when she is linked to the hit and run, he soon finds that there is much more to her story than meets the eye. I admired Craig’s integrity when he found himself in an extremely difficult position, even if the local police force were not initially enamoured with his desire to help. Craig’s family are not likeable at all and it was satisfying to see the stance he took when trying to uncover the truth.

It is hard not to feel sympathy for Craig as, slowly, more and more secrets are revealed about his family, none of them positive. It is a wonder he is as normal as he is as we discover the crimes and misdemeanors that have been taking place in his family for decades. One of these crimes, a cold case which Craig decides to investigate, was my favourite part of the plot and I was very pleased with its outcome. I felt really sorry for Craig’s wife who supports him throughout the book, not knowing what secrets he, himself, is hiding.

Sometimes you read a book and start to visualise what it would look like on TV and this was definitely the case for me with The Body in the Mist. This book really does have everything – a modern-day police investigation, a cold case, heinous family secrets and a criminal trial – and I could quite easily see this as a mini-series. I, for one, would be gripped!

Although this is the third in the series, it can be read as a standalone so it is not essential to have read the previous two. I have read the previous book, The Body on the Shore, and whilst I really enjoyed that one, The Body in the Mist really is something special. Just when I thought the book had reached its conclusion, the twist at the end truly made me gasp – it will be interesting to see what happens in book 4 as a result of this revelation!

If you haven’t read any of this series yet, you won’t go far wrong by starting with The Body in the Mist. One of my favourite reads of the year so far.

With thanks to Canelo and Net Galley for my ARC. If my review has made you curious, stay tuned to my blog as on May 27th, as part of the blog, tour, I have a great extract to share with you.