On My Life by Angela Clarke 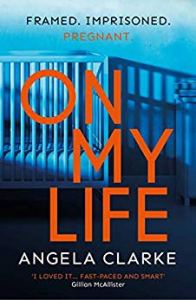 After a whirlwind romance, Jenna is preparing to marry Robert and become stepmother to his teenage daughter, Emily. Everything changes, however, when Emily is murdered and Robert is nowhere to be found, a trail of his blood leading the police to believe he has been dragged, dying, from the house. Arrested and charged with the murders, Jenna is adamant that she is innocent and that someone has set her up. Finding out that she is pregnant, she knows that she must, somehow, prove her innocence in order to provide a life for her unborn child.

Every now and then a book comes along that really makes you sit up and think about what you are reading – this is certainly one of those books. I have read several books set in women’s prisons but what sticks out here is the research that Angela Clarke has clearly done to provide an eye-opening account of what really goes on inside such a place. It was easy to picture the scene inside of the prison and, at times, felt genuine fear for Jenna as she tried to hide the fact that she was the ‘blonde slayer’ from the other inmates. Knowing she was innocent, I spent the whole book rooting for her and hoping that justice would prevail.

The book is told in two time frames, both as gripping as the other. As well as the real-time plot of Jenna’s prison life, we travel to the near-past to witness the build-up to the murder. It doesn’t take long to realise that all is not well in Robert’s life and that there are secrets that his family would prefer to be left hidden. Prior to the murder, we see Jenna discovering some of these secrets, leading her to wonder if it could be someone close to home who has set her up. Angela Clarke gives us just enough information about these characters to make you wonder which one, if any, it could be. A couple of events in the book did lead me to the right conclusion, but I was still left shocked when the whole truth was finally revealed.

It was, perhaps, the prison scenes that I enjoyed the most, especially those involving Jenna and her cellmate, Kelly. It was nice to see a genuine friendship developing and was a huge contrast to scenes involving the more violent inmates. It was inevitable that, at some point, Jenna’s identity would be revealed and I felt genuinely scared for her as, one by one, the other women began to turn on her.

Angela Clarke has done a fantastic job of highlighting the poor prison conditions, in particular those of pregnant women. I was already a fan of the author’s social media series but I feel that On My Life could be the book that puts her firmly in the public eye. This is a must read.

With thanks to Hodder & Stoughton / Mulholland Books for my copy. Take a look at my reviews of Angela Clarke’s other books:

One thought on “On My Life by Angela Clarke”