Jenny and Kath were childhood friends, always together. When Jenny moved to Australia to further her swimming career, she not only lost touch with Kath but also Tom, the love of her life. Now eight years later, Jenny has made the journey to France where Kath is now living, keen to catch up on all of their lost years. After a pleasant start, things soon begin to change and Jenny starts to suspect that Kath has not been the friend she thought she was. Just how manipulative has she been and what exactly does she have in store for Jenny?

The Good Friend has a plot that many people could relate to. In the days before social media, it was easy to lose touch with people you had spent your school years with, only to wonder what had become of them. For Jenny, with her successful swimming career taking her to the other side of the world, she has not had contact with her childhood friends for many years. Now, after becoming tired of spending all her waking hours in the pool, she has decided to rekindle past friendships. From the outset, we see her wondering if she has made the right decision, her father’s words making her think that Kath is not the friend she thought she was.

We soon see how controlling Kath is, and it is apparent that all is definitely not right with her. As much as I liked Jenny, I was desperate for her to get away from the house as there was a definite sense of foreboding. Kath, I found, a very complex character, although we are not fully aware of how duplicitous she has actually been. I enjoyed the slow-moving plot as it gave me a chance to build my own suspicions and try to determine what the outcome would be. Although some of my theories did prove to be correct, I did not predict the shocking ending at all, and was totally taken aback by what happened!

The French setting helped to create a very claustrophobic atmosphere for Jenny who found herself drawn in to the locality. Jo Baldwin’s description painted a vivid picture of the Languedoc lavender fields, their beauty a stark contrast to the tension and uneasiness of all of the main characters.

It is hard to say too much about The Good Friend without giving too much of the plot away, but what I will say is that I thoroughly enjoyed it and, towards then end in particular, found it increasingly difficult to put down. A great debut!

With thanks to Anna at Red Door for my copy of The Good Friend.

Take a look at the rest of the blogs on the tour: 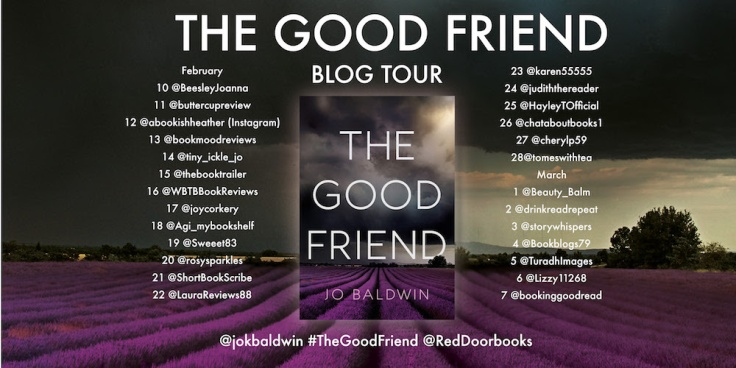