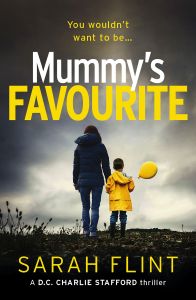 I’m really pleased to be able to share an extract from the brilliant Mummy’s Favourite by Sarah Flint as part of the blog tour. Available for some time as an e-book, it has now been published as a paperback so if you haven’t been able to read this fantastic series yet, there’s no time like the present. My review can be read here.

Buried in a woodland grave are a mother and her child. One is alive. One is dead. DC ‘Charlie’ Stafford is assigned by her boss, DI Geoffrey Hunter to assist with the missing person investigation, where mothers and children are being snatched in broad daylight.

As more pairs go missing, the pressure mounts. Leads are going cold. Suspects are identified but have they got the right person? Can Charlie stop the sadistic killer whose only wish is to punish those deemed to have committed a wrong? Or will she herself unwittingly become a victim.

‘Ah DC Stafford, you’re late again and you look like shit. Glad you could make it though, fresh from your Super Recognizer’s course. Where have you been? We’ve all been waiting for you. Or did you fail to recognize it was 8.30 and not 8 a.m.?’

DI Geoffrey Hunter didn’t wait for an answer. ‘Right, now we’re all here, at last. I’ll get on.’ He accentuated his words and Charlie felt herself redden at his sarcasm. A bollocking on a Monday morning in front of her colleagues was never the best start to a week.

He ignored her. ‘We’ve had a few new reports referred to us over the weekend which I need to assign. One of which has potential.’

Charlie pricked her ears up. There were rarely cases with potential in her department, unless Hunter meant potential for trouble. She worked in the Community Support Unit, a branch of the CID or Criminal Investigation Department, having only acknowledged her ambition to investigate major crime in the last year.

Up until then she had put off becoming a detective, preferring to be out on the streets dealing with crime as it happened, and as it often happened right in front of her she had excelled.

Her first big collar after leaving Hendon to join Charing Cross police station had been a rapist she’d recognized from an e-fit. On little more than a hunch and a similarity to the suspect, she’d found him in possession of duct tape, a knife and keys to a Vauxhall. Having scanned the streets, she’d located his car, and discovered photos and details of a female in a nearby street. Her suspicions aroused, she’d headed straight to the woman’s address and kicked the door down only to find her gagged and taped up in her bed, the last victim of a series of horrific attacks perpetrated by the same suspect. The mental anguish of the victim in the case affected Charlie greatly. It was personal. She went out of her way to stay with the woman through every step of the investigation, determined to obtain justice for her. She knew what it was like to be on the receiving end of injustice. It was exactly for this reason she’d joined the police.

She stayed at Charing Cross initially loving the adrenalin of the streets before transferring to Lambeth borough, where she continued to revel in her work. She was rewarded with an advanced pursuit driving course and the newly developed Super Recognizer’s course and was head-hunted by some of the specialized CID squads in the Met investigating serious crime and criminals.

After being shot at in a backstreet of Brixton, she’d decided that CID was the place to really make a difference so returned to Hendon Training College; only to find it a shell of its previous self, with many of the buildings and tower blocks empty and derelict.

She’d emerged as a detective constable and found herself immediately posted to the CSU, first stop for all budding CID officers. Nearly six months later she was still there.

The unit had the remit to deal with any allegations involving domestic violence, race, faith, sexual orientation or disability, but as she was just discovering, it was the most risky and politically explosive unit in CID. If you got it wrong here, your career would be ended before it had begun.

She hoped it would give her the chance to get out and about and, if she did get out, that Hunter would come with her. He might be her boss but he too liked to be out on the streets and had the reputation for attracting action.

‘Like I said,’ he looked to be studiously avoiding making eye contact with her. He was obviously keen to make her sweat. ‘It has potential. A woman and her son, missing since Friday, reported by her husband today. Nothing too sinister at the moment, although the husband sounds like a nasty bastard. It’s being dealt with by the missing persons unit, but they’ve asked us to take a look, as the couple have a history of domestic violence. The chances are the wife’s probably just come to her senses and moved out, but it’s raised concerns because they have another son who has been left behind.’

He paused and this time looked directly at her. 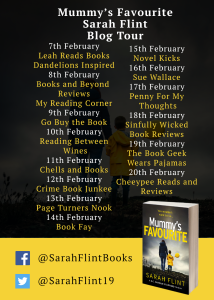 Or get the eBook from:

With thanks to Vicky Joss and Aria Fiction.