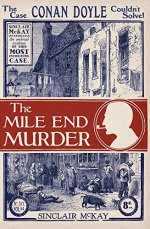 In 1860, Mary Emsley, a 70-year-old widow of substantial means, was found bludgeoned to death at her home in London. Although she lived a fairly simple life, Mary was a wealthy woman due to the numerous houses she rented out around the London area, but this wealth brought its own problems. Seemingly disliked by many of her tenants, she employed a few trusted men to collect rents on her behalf although it was not unknown for her to venture into the roughest parts of town to receive the payments herself. Was her death at the hands of a disgruntled tenant or was the cause much closer to home?

With the body remaining undiscovered for several days, clues were limited. It was thought, though, that due to the woman’s distrust of strangers, and there being no evidence of a forced entry, the killer must have been admitted to the house by Mary herself. The police struggled to find a culprit until someone known to the murdered woman came forward with some information. On investigating this tip-off, the police found that there case had suddenly opened up – they now had a firm suspect for the first time.

The Mile End Murder sees Sinclair McKay re-examining the evidence (or lack of) and coming to the conclusion that a huge miscarriage of justice led to the execution of an innocent man. This was a view shared by Sir Arthur Conan Doyle, the creator of the infamous consulting detective, Sherlock Holmes. He would, some years later, write his own thoughts on the case, The Debatable Case of Mrs Emsley. Miscarriages of justice were not uncommon in the Victorian era, but it is still shocking to see how a man could be sentenced to death on a small amount of circumstantial evidence. The author has come up with another possible culprit although, again, lack of evidence would not see a modern jury find them guilty.

Victorian crime is something I have always enjoyed reading about and Sinclair McKay has written a very readable book dealing with not just the murder but also the social history of the period. The Mile End Murder has been well-researched and will appeal to anyone interested in historical crime of the Victorian period in general.

With thanks to Net Galley and Quarto Publishing Group – Aurum Press for my copy of The Mile End Murder.