After such a great reading month in August, September has been the complete opposite! Work and a dreaded cold has prevented me from reading as much as I would have liked  but I did manage to read two of the books I had been eagerly anticipating. I did manage to feature on several blog tours, sharing some great extracts and reviews:

The Home by Karen Osman

I was able to share an extract of The Home, the latest book from Karen Osman whose previous book, The Good Mother, was one of my favourites of 2017.

The Body on the Shore by Nick Louth

A plot that took me in a completely different direction than I was expecting! A tense, high-octane read with plenty of action. My review formed part of the blog tour.

Keep Her Silent by Theresa Talbot

What starts off as a serial killer plot soon escalates into a story about a real-life scandal. My review for this intriguing book was part of the blog tour at the beginning of the month.

Even a crime fiction fan needs a little light relief at times and while these memoirs of a social worker do, at times, detail some shocking tales, this was a book that definitely had me laughing out loud.

Books I Have Read

The third in the Kelly Porter series investigates the disappearance of several young women in the Lake District and the suspicious suicide of the local lord of the manor. My review will form part of the blog tour.

Tell Nobody by Patricia Gibney

The fifth Lottie Parker book is an emotional tale of murder and child abuse. This is a series that just keeps getting better.

After the emotional rollercoaster that was the previous book, the ninth Kim Stone book is another superb read that all fans of the wonderful Angela Marsons will absolutely love.

Books I Have Acquired 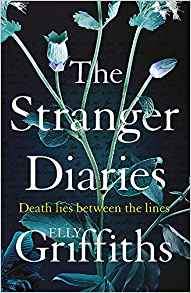 Clare Cassidy is no stranger to tales of murder. As a literature teacher specialising in the Gothic writer R.M. Holland, she teaches a short course on them every year. Then Clare’s life and work collide tragically when one of her colleagues is found dead, a line from an R.M. Holland story by her body. The investigating police detective is convinced the writer’s works somehow hold the key to the case.

Not knowing who to trust, and afraid that the killer is someone she knows, Clare confides her darkest suspicions and fears about the case to her journal. Then one day she notices some other writing in the diary. Writing that isn’t hers…

It’s 1977 and Jack Sheffield is appointed headmaster of a small village primary school in North Yorkshire. So begins Jack’s eventful journey through the school year and his attempts to overcome the many problems that face him as a young and inexperienced headmaster.

The many colourful chapters include Ruby the 20 stone caretaker with an acute spelling problem, a secretary who worships Margaret Thatcher, a villager who grows giant carrots, a barmaid/parent who requests sex lessons, and a five-year-old boy whose language is colourful in the extreme. And then there’s also beautiful, bright Beth Henderson, who is irresistibly attractive to the young headmaster…

Warm, funny and nostalgic, Teacher, Teacher is a delightful read that is guaranteed to make you feel better, whatever kind of day you’ve had.

As a big fan of Elly Griffiths, I can’t wait to read The Stranger Diaries this month! Happy reading!