The Lost Child by Patricia Gibney 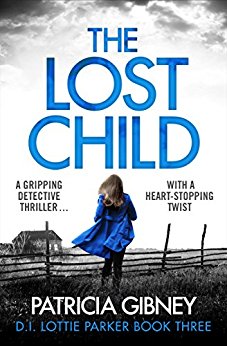 When an elderly woman is found murdered and her daughter cannot be found anywhere, Detective Lottie Parker begins to fear for the safety of the whole family. Then a nearby house is set on fire, exposing secrets that threaten the make this the biggest murder case Ragmullin has ever seen. For Lottie however, it proves to be much more personal, as there appears to be a connection to a case that her father was working on shortly before he took his own life. Could Lottie be finally about to discover the truth about her father’s death?

The Lost Child is the third in Patricia Gibney’s Lottie Parker series and, like the others, is a tale of murder and deeply buried secrets. Here, we find Lottie, once again, struggling with her past, relying upon the use of prescription drugs and alcohol just to get her through the day. Determined to find out the truth about her father’s suicide, the strain on the relationship she has with her mother is becoming even more pronounced and the addition of a new baby to the household is doing nothing to help her stress levels.

What starts out as, potentially, a home invasion gone wrong, soon turns into a large-scale murder and missing person investigation when Tessa Ball is found killed in the home of her daughter who has subsequently gone missing. The name of the deceased soon strikes a chord with Lottie and leads her off into a dangerous investigation with links to her father and a cover-up of the highest level. As the death count rises, Lottie and her team have to try to piece together all the clues and link all the main players – of which there are many! With so many key characters, it could have been confusing to keep up with who they all were but Patricia Gibney’s style of writing makes the plot easy to follow.

Ever since discovering the cause of death of Lottie’s father, it was inevitable to the reader that she would not give up her search for the truth. There was always going to be more to the story but I was not prepared for what was about to come! The circumstances surrounding his life and death have made a particular relationship in the series more understandable and certainly makes any future books interesting! A very clever twist!

The Lost Child is a great addition to the Lottie Parker series and I look forward to the next one!

With thanks to Bookouture and NetGalley for my ARC.

2 thoughts on “The Lost Child by Patricia Gibney”