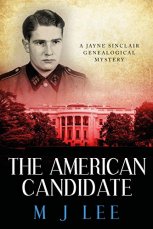 Genealogical Investigator, Jayne Sinclair, is about to undertake her most high profile case to date after being tasked to research the family history of a potential candidate for the Presidency of the United States of America. When the man who commissioned the research is shot dead in front of her eyes, Jayne realises that someone will stop at nothing to prevent the research from being carried out. Exactly who is the candidate’s mysterious grandfather and why is someone so keen to keep his secrets well hidden? Jayne knows that, if she is to continue with this case, her life is in the utmost danger.

The American Candidate is the third of the Jayne Sinclair series and, in light of recent upheavals in American politics, deals with a very topical subject. Although the first two books in the series (The Irish Inheritance and The Somme Legacy) had an element of danger, this one really ups the ante and is quite violent from the start when someone she has just met is killed in cold blood in front of her. What follows is a mad dash through the streets of London as Jayne and her companion endeavour to escape from assassins disguised as police. This part of the book was very reminiscent of the Dan Brown book The Da Vinci Code and, indeed, even mentioned one of the same locations – Temple Church. I found this chase sequence very exciting and, due to the skills of the people chasing them, was desperate to discover how they would manage to get away.

Like the other books in the series, The American Candidate is set in two time frames, the other era being prior to and during World War Two. We discover quite early on that the candidate’s grandfather was heavily involved in the Nazi movement and, at times, this was quite disturbing to read due to its subject content. It is obvious that the author has done a great deal of research and it was fascinating to read about the English supporters of Hitler’s ideology and their campaigns under Oswald Mosley. It was easy to see how some young men could be seduced into believing what they were being told about the ‘enemy’ – again a very topical subject today.

It’s not often that a book with a genealogical slant has a twist so I was not expecting it when one occurred towards the end of this book. This was a very clever move and was one that all seemed so obvious when it was explained!

The American Candidate is a great addition to the series and I look forward to reading the next one.

2 thoughts on “The American Candidate by M J Lee”