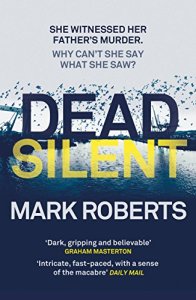 Professor of medieval art, Leonard Lawson, has been mutilated and murdered, the attack witnessed by his traumatized daughter, Louise. To add to the horror, DCI Eve Clay must try to discover the significance of his body being arranged into a parody of the art work he has spent his life studying. Despite the professor having no known enemies, Clay knows that this attack was personal and is desperate to find the culprit before they find another victim to exact revenge upon.

I was first introduced to the books of Mark Roberts earlier this year after looking for reads set in my home city and thoroughly enjoyed the first book in the Eve Clay series, Blood Mist. Having fully intended to read the series in order, I was given the opportunity to participate in the blog tour for the superb Day of the Dead, meaning that I have actually read the books out of sequence, Dead Silent being the second of the three. This was not a problem, however, as it not completely essential to have read them in order.

If you have read any of the Eve Clay books, you will already know that there is a touch of the macabre about them and this is indeed evident in Dead Silent. The descriptions of the crime scenes were particularly graphic and not for the faint-hearted. It is easy to imagine these novels on the small screen and some of the scenes in this book were reminiscent of the BBC series, Messiah, starring Ken Stott.

In Eve Clay, we have a very likeable, if troubled protagonist. In Dead Silent, we get to find out a bit more about her childhood in the children’s home, helping to explain why she is so dedicated to her job yet neurotic about the safety of her family. It is also good to see a police department where everyone seems to get on well and is just as devoted to solving the case as Clay.

What I enjoyed most about this book is that Mark Roberts drip-feeds you information throughout, allowing you time to try to fathom out what is taking place. Just when you think you have it all worked out, though, he throws a complete curve-ball and makes you reconsider everything you thought. This made Dead Silent a genuinely enjoyable read, and one which makes you think about how important and formative the early lives of children are.

A fantastic read and I can’t wait for the next installment!