Rather be the Devil by Ian Rankin 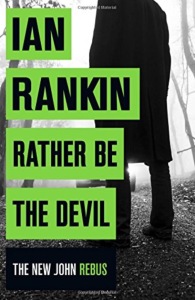 Forty years ago, Maria Turquand was found murdered in her hotel room on the same night that a famous rock star and his entourage were staying there. Despite the case being quite high profile at the time, no one was ever convicted of the crime. Now, with time on his hands, retired detective John Rebus is determined to solve the case. Meanwhile, in Edinburgh, local gangster Darryl Christie has been the subject of a vicious attack. Is the notorious Big Ger Cafferty involved or is Christie’s rumoured involvement in a large-scale money laundering scheme to blame?

Now a couple of years into his retirement, and despite his health being a cause for concern, it soon becomes apparent that Rebus is not going to be spending his twilight years relaxing. Unable to take a complete break from the job that consumed his life, his interest in the Maria Turquand case puts him, once again, in contact with his old colleagues Siobhan Clarke and Malcolm Fox. One of the more fascinating parts of these later books in the series (this is the 21st!) is the change in relationship between Rebus and Clarke. Once the superior officer, John must now rely upon his former subordinates in order to find out the information he needs.

Of course, one of the highlights for Rebus fans is the return of Gerald Cafferty. Like Rebus, he is seeing the younger generation take over his once thriving ‘business’ and, on the surface, he looks to be far removed from it. We have learned to never underestimate Big Ger, however, and the scenes between him and his nemesis, Rebus, are an absolute joy to read. There has always been a grudging respect between the two men and this is shown powerfully during the end scenes of the book when the life of one of the men looks to be in serious danger.

Ian Rankin has, again, produced a superb book which shows that, although Rebus may be advancing in years, there is still life in the old dog yet! After decades of reading this series, I dread the day Rankin decides that Rebus should hang up his boots for good.

With thanks to Net Galley and Orion Publishing Group for the ARC.