The Daughters of Red Hill Hall by Kathleen McGurl

Bored with cataloguing boxes of fossils in the museum where she works, Gemma’s curiosity is piqued when she finds, in one of he boxes, a pair of ruby-encrusted duelling pistols. Realising that there must be an interesting history behind the artefact, research takes her back to the year 1838, when two sisters were found shot in the cellar of Red Hill Hall. A tale of intrigue follows and soon Gemma finds that history is repeating itself as the relationship between herself and her best friend, Nat, falls into disrepair. Will Gemma end up like one of the daughters of Red Hill Hall?

This is actually a story within a story as we find out about Gemma’s life alongside the lives of Rebecca and Sarah, the daughters referred to in the title of the book. There are many parallels in their respective stories, not least the idea that there is a perceived inequality felt by two of the characters: Sarah has always felt that Rebecca is the favoured daughter, while Nat appears to harbour an intense jealousy of Gemma due to her stable upbringing. The way both sets of relationships break down dramatically with fateful consequences is a key part of the book, well-written by the author.

The Daughters of Red Hill Hall was an easy read, mainly because it was so enjoyable. This is the first of Kathleen McGurl’s books that I have read but it certainly won’t be the last – the preview chapters from her next book that were included at the end have already whetted my appetite for ‘The Pearl Locket’.

This book was received from Net Galley and Carina in return for an honest review.

Blood of the Rose by Kevin Murray

The year is 1986 and, after receiving a series of threatening letters, a newspaper editor is brutally slaughtered. With little to go on, the police are baffled; their only clue being a rose left near the scene of the crime. The first murder is followed up by a series of equally macabre killings, the carefully placed rose, again, being a clue that the slayings are all linked. Alan Winters, a young Scotland Yard detective, is tasked with finding the murdererer but with Jennifer Chapman, the daughter of the first victim intent on launching her own investigation, will he find the killer before he finds them?

Initially, despite its shocking introduction, I found this book hard to get into as I found it difficult to like any of the main characters. After the second killing, however, I felt that the book took a major turn for the better and the characters began to seem more real and likeable. Setting the book in 1986 was a great idea as whereas nowadays there would be a reliance on forensics and the use of computer databases, the Scotland Yard detectives had to use traditional police legwork to make connections.

As is found in many books of this genre, the story is interspersed with chapters written by the killer, this time in the form of a diary. What is different, however, is that Kevin Murray manages to write the killer’s story in a way that makes you feel empathy towards him – a stark contrast to the feelings you have about him whilst he’s on his killing spree!

Without giving too much away, it becomes obvious where the killer is going to be found but the author succeeds in not making it too easy to discover exactly who it is. The ending tears away at breakneck speed as the guilty party prepares for their final showdown. The slight twist at the end was another clever touch.

This book was received from Urbane Productions and Net Galley in return for an honest review.

The Disappearance by Annabel Kantaria 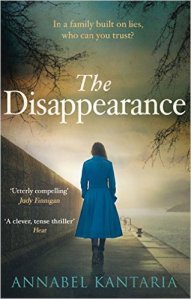 To the outside world, Audrey and Ralph Templeton seemed to have the perfect marriage: two young children, a beautiful home in India and a great deal of wealth. Looks can be deceiving, however, and, behind closed doors, things were very different.

Fast forward several decades and, on her 70th birthday, Audrey Templeton disappears… just after telling her children, John and Lexi, that they are due to inherit a fortune on her death. What makes this disappeance even more complex is that it takes place on a cruise ship, sailing around the Greek islands. Has Audrey jumped overboard or has something even more sinister happened?

After reading the synopsis of this book, I envisaged it being a straightforward ‘whodunnit’. I couldn’t have been more wrong! Although I did figure out what had happened to Audrey, this did not detract from the brilliance of this story in any way. The author does a good job in introducing significant events throughout the book which helps you to gain an understanding of Audrey’s life and helps to explain why she made the decisions she did.

It is hard to say much more without giving away any of the plot. Suffice to say, I was very pleased with the ending as it tied up several loose ends. I do think, however, there is a sequel there if the author chooses!

This book was received by Net Galley, Harlequin (UK) Limited and
Mira UK in return for an honest review.