Quick and the Dead by Susan Moody

After the break-up of her marriage, detective Alex Quick leaves the police force and forges a career compiling art anthologies. When her business partner, Dr Helena Drummond, disappears and the body of a woman is found in the art historian’s home, Alex is determined to find the missing woman and discover whether she is a victim or the perpetrator of the crime.

From quite early on in the book, it was obvious that this was not going to be a story for the fainthearted. The description of the body was extremely graphic and made me wince slightly. A word used by Alex, later in the book, to describe a part of the dead woman’s body also, seemed to me, to be out of character.

Although the culprit wasn’t too difficult to identify, I did find that there were enough twists in the story to keep me interested. I’m also intrigued as to how the series will continue as this book didn’t pan out exactly as I thought it would!

This book was received from Net Galley and Severn House in return for an honest review.

Finally, fans of Steve Robinson’s Jefferson Tayte series have got what they wanted – JT is investigating his own past. Adopted at a very early age, Tayte has made a career out of researching the family history of other people when, ironically, he has no idea about his own past. After receiving a clue in a previous book, however, he sets off on a journey that will change his life…

Set mainly in Germany, and told during two time frames (present day and World War Two), Kindred tells the story of two friends, Volker Strobel and Johann Langner and the roles they both played in World War Two. Without giving too much away, it is obvious from quite early on in the book that they are going to have very different wars, but what happened in the past that leaves JT and his partner, Professor Jean Summer, fearing for their lives in the present day?

‘Kindred’ deals with some very emotive issues, not least the subject of the Holocaust. The descriptions of the events at Dachau concentration camp and the atrocities at Kristallnacht were particularly harrowing but essential in explaining the circumstances behind JT’s adoption. Much research has evidently gone into ensuring that this book, although fictional, is as true-to-life as possible.

This is the fifth book in the Jefferson Tayte series, and arguably the best, as Steve Robinson is very adept at writing about World War Two, as shown in another of his books, ‘To The Grave’. You do not need to have read the previous books in the series, but you’ll want to read them after finishing this one. The only problem with this book? The wait before the next one!

Kindred will be published on April 12th. Buy at Amazon

Thank you to Net Galley for providing this book in return for an honest review.

The Missing Hours by Emma Kavanagh

One minute Selena Cole is in the local playground with her children and the next she has disappeared. Returning the next day, with, allegedly, no memory of what has happened, it is up to Detective Constable Leah Mackay to try to piece together what occurred in those missing hours. When Leah’s brother, Detective Sergeant Finn Hale, is tasked with finding out who killed solicitor Dominic Newell, the two cases seem to become linked. Is Selena involved in the murder or is there something even more sinister going on?

The case is complicated even further due to Selena’s occupation as part of a company specialising in kidnap and ransom – that is the safe recovery of people who have been taken in kidnap-rife areas of the world. As connections are made between the murder and the world of K&R, it is up to Mackay and Hale to bring the killer to justice and also piece together what happened during Selena’s disappearance.

I found that this book took me several chapters to get into but, once I did, I was hooked. Told mainly from the perspectives of the two police officers, we get to see the independent investigations and also the points when they realise that the two cases intertwine. The world of kidnap and ransom was, on the whole, new to me, and so I found this aspect very interesting. It is obvious that much research has gone into this as shown in the occasional interspersed sections detailing fictional kidnap cases.

It is a given that, in all psychological thrillers, there will be a twist but often, these twists are signposted. This was not the case, however, in ‘The Missing Hours’ as I was genuinely surprised when the moment was revealed. My only negative would be the ending of the book as I felt that it finished a chapter too early.

‘The Missing Hours’ will be published on April 21st.

This book was received from Net Galley and Randon House in exchange for an honest review.

The Cradle Will Fall by Clare Donoghue 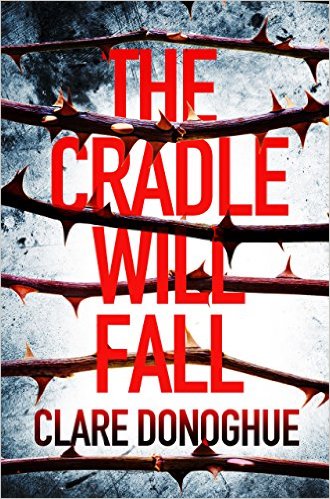 ‘The Cradle Will Fall’ is a prequel to the crime novels featuring Jane Bennett and DI Lockyer. This short story picks up Bennett’s career in the Serious Case Team after her maternity leave. When she enters the home of a mother and her child, she is not prepared for what she encounters. As everyone around her crumbles, however, Bennett proves her worth, remaining calm and showing the tough exterior that we have come to see in her following cases. We also see the introduction of Lockyer and get to see the circumstances behind their close working relationship.

For anyone who has not yet read any of Clare Donoghue’s books, this is an ideal way to get to know the characters. For those already familiar with Bennett and Lockyer, it was good to see the circumstances behind some already known events.

Set after Conan Doyle’s ‘The Final Problem’, this is the second Sherlock Holmes novel by Anthony Horowitz. This time, however, neither Holmes nor Dr. Watson appear!

Frederick Chase from the Pinkerton Detective Agency has arrived in Switzerland where he hopes he can find information that will lead him to Clarence Devereaux, the man who is aiming to take over where Moriarty left off. Ably assisted by Inspector Athelney Jones from Scotland Yard, the trail soon leads them back to London and the game is afoot…

Devereaux, just like Moriarty was before him, is a man of mystery, with very few people ever setting eyes on him. The trail leads them throughout the streets of London and soon, a trail of bodies is left in their wake.

Throughout this book, I felt that there was going to be a twist and tried to anticipate what it may be. However, I wasn’t prepared for it when the truth was finally revealed! The relationship between Jones and Chase is very much a mirror of the Holmes and Watson partnership and it seemed that the author was leading you to believe that this was the beginning of a new pairing of consulting detectives. The ending was very clever and was a genuine ‘gasp out loud’ moment!

A part of the book that I particularly liked was its homage to one of Conan Doyle’s short stories, ‘The Read-Headed League’ – one of my favourite Sherlock Holmes stories.

If you’re a fan of the original Holmes stories, you won’t be disappointed by ‘Moriarty’.

Brad Johnson travels to Manchester from America to research his roots after the death of his aunt. After suffering a heart attack at an art gallery, foul play is suspected and soon the Manchester police along with a private investigator known as ‘The Gent’ are trying to track down the culprits. Is it linked to his family tree?

The idea behind this book is good and the crossover between police procedure and genealogy is a good idea. Throughout the book, the author keeps you guessing as to how Brad’s heart attack is related to the other plot: the murder of prostitutes.

I did feel, however, that the role of ‘The Gent’ was slightly confusing and I was unsure as to what he actually achieved. His methods of research seemed convoluted, especially with the wealth of resources that are now available online to family historians. The police also seemed to be making it up as they were going along!

All in all, I felt that this book promised lots but was slightly disappointed with the outcome.