Death in Profile by Guy Fraser-Sampson 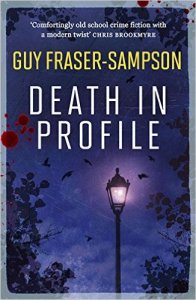 A serial killer is at large in Hampstead and the police are going round in circles. With no witnesses or forensic evidence, their investigation is stalling until the discovery of a new body. Will this bring them the leads they so desperately crave? DS Collison is brought in to try to move the investigation forward and he soon brings his own style of policing to the table.

I am in two minds about this book. One one hand, the plot and its eventual conclusion made good reading. The characters are likeable and the author manages to avoid including the cliched ‘troubled’ police officer with peronal issues.

However, there were several sections of the book that I did not enjoy. I felt that the ‘golden age of detection’ section was incredibly far fetched, especially when several of the police officers were coerced into participating in the profiler’s role play. Also, a lot of the conversations that took place between the investigating officers seemed to state the obvious. I also felt that the officers seemed to be very forensically unaware and was surprised that there was no mention of the perpetrator not wishing to leave their own DNA at the scene…

Based on this book, I would read a second book in the series but I would like to see the omission of the profiler and more old-fashioned police procedure.

This book was received from Urbane Publications and Net Galley in return for an honest review.

Trust No One by Clare Donoghue

When the body of doting father Richard Taylor is found in bed by his children Harvey and Olive, DS Jane Bennett and DI Mike Lockyer find themselves dealing with anything but a straightforward murder case. Having recently returned to work as a result of events from her previous case (detailed in No Place to Die), Jane finds herself embroiled in a disturbing investigation where it is obvious that someone is lying, but who?

Although Trust No One is the third book in the series, it can be read as a standalone. After reading the previous book, however, I had looked forward to Clare Donoghue’s next instalment and, happily, I was not disappointed! It is easy to warm to the character of Jane Bennett as she juggles life in the police force with an ill father, an autistic son and an absent ex-partner. After events in the previous book, Lockyer’s overprotectiveness is also understandable.

One of the mistakes a lot of authors make is to include too many characters and make it too confusing to guess who the murderer is. This is not the case here – even though there are few potential suspects, I still found myself changing my mind constantly as to who had done it! When the culprit was revealed, I chastised myself for not remembering something from early on in the book that I thought, at the time, could be significant!

This is a well-written thriller, fully deserving of a five star rating. It can be pre-ordered from Trust No One

This book was received from Net Galley and Pan in return for an honest review.

The Silent Girls by Ann Troup 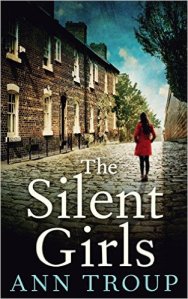 The Silent Girls, the second novel from Ann Troup, tells the story of Edie who has the unenviable task of clearing out her recently deceased aunt’s house. Coronation Square, where the house is situated, has a macabre history due to it being the site of five murders many years before and Edie soon finds herself drawn into the past where secrets refuse to stay hidden. It seems that everyone in Coronation Square has a link to the murders but who is telling the truth and who is more involved than they dare to mention?

One of the strengths of this book is the author’s descriptions. It is easy to imagine the contrast between the homely abode of Lena Campion compared to the damp, dark house of Edie’s Aunt Dolly. Indeed, each new scene in the book brought vivid images and aromas to mind. The character development is also well-written – the relationship between Edie and Sophie, in particular, is a joy to read.

The Silent Girls is a beautifully-written yet dark story with enough twists and turns to keep you guessing. Although I did work out who had committed the murders, the book is filled with enough red herrings and sub-plots to keep you interested.

This is a really good read – I look forward to Ann Troup’s next offering!

This book was received from Net Galley and Carina in return for an honest review.