The Girl You Lost by Kathryn Croft 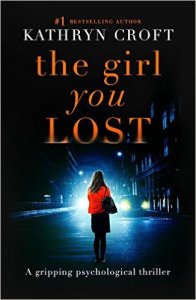 When six-month-old baby Helena is abducted, the lives of her parents, Simone and Matt, are thrown into complete disarray. Despite the police investigation and the work of a private investigator, no trace of her was ever found.

Fast forward eighteen years when Matt is a successful general practitioner and Simone is working for News 24, and their lives are, yet again, about to become traumatic with the appearance of Grace, who claims to be their long lost daughter. Desperate to finally have closure, Simone, assisted by her work colleague, Abbott, find themselves drawn into a dark world where it is impossible to know who to trust.

This book is a fantastic pyschological thriller not least because of the occasional chapters written by an unknown person, detailing how their depraved lifestyle began. Although the identity of this writer is not revealed until the end of the book, I did correctly suspect who it was. This did not, however, spoil the reveal at the end but it did answer some of the questions I had whilst reading.

Although some of Simone’s actions are baffling, it showed how desperate she was to uncover the truth, not realising that, in doing this, she was uncovering a huge web of deceit and criminality dating back many years. There are some real heart-stopping moments when you genuinely wonder what the outcome will be.

This book was received from Net Galley and Bookouture in return for an honest review.

The Girl in the Ice by Robert Bryndza

When the body of a young woman is found beneath a sheet of ice in London, DCI Erika Foster is called upon to lead the investigation. Foster is returning to work, we discover, after her previous investigation went badly wrong, and led to the death of several officers, one of whom happened to be her husband. This case is not going to be straightforward, however, as the murdered girl is from a well-known family and Erika soon finds herself falling foul of her superiors as she makes the link between this body and the murder of three prostitutes.

Strong female detectives seem to be a common theme for many authors recently with the likes of D.I. Kim Stone (Angela Marsons) leading the way. Erika Foster is certainly a worthy peer and is deserving of a series. (A follow-up book, ‘The Night Stalker’, is already in the pipeline).

Like all fictional detectives, Erika is a flawed character – her single-mindedness often gets her into trouble although it is obvious to see that she is acting in the best interests of the case. She is a likeable character and, throughout the book, you find yourself rooting for her, hoping that her hunches are correct.

‘The Girl in the Ice’ is a fast-paced, well written thriller with enough twists and turns to keep you guessing. It will be interesting to see if the part of the story involving Ivy’s grandson is resolved in the next book.

Definitely worthy of a five star rating and promises to be one of the crime books of 2016.

This book was received from Net Galley and Bookouture in return for an honest review.

The Cost of Silence by John Nixon

The year is 1992 and a man has been murdered whilst perusing the parish registers in the vestry of a country church. It does not take the police long to apprehend the culprit although no motive for the killing has ever been discovered. With the death of the murderer in prison, will the real reason for the attack ever emerge?

Fast forward to the present and a retired crime reporter decides to take up the case. As there appears to be a genealogical aspect, he enlists the help of Madeleine Porter, a local family history researcher.

As with all of Nixon’s previous books, the subject has been well researched and the story moves on at a quick pace. It was good that the importance of backing up your theories was highlighted and how jumping to conclusions can lead you completely off track.

The sub-plot concerning Oliver was also a good addition although I felt that this part of the story was left hanging at the end. Will this be addressed in a further book or is that the end? I don’t feel that it would warrant a book of its own so could have been fully resolved here.

The sign of a good book is that you cannot put it down. The fact that I have been exhausted all day due to staying awake until the wee small hours to finish it tells you how good ‘Follow Me’ is!

Freddie Venton is growing weary of life. Working in a London coffee shop but with aspirations of becoming a serious journalist, her life changes completely when she spots a face from her past. Convinced that her former friend, Nasreen, is with a group of police officers about to take part in an operation, she manages to track them down to a crime scene where the body of a man has been discovered. Using subterfuge, Freddie manages to access the scene but is soon discovered.

After realising that there is a social media link to the killing, Freddie is drafted in as a consultant. When a twitter account is set up by the killer, Freddie has to convince the police to take the social media aspect of the case seriously – not an easy task when the majority of those investigating the case seem to be technophobes! As the death count rises and it becomes apparent that a serial killer is on the loose, will the police be able to apprehend the culprit before someone close to the investigation becomes the next victim?

Angela Clarke does a good job in keeping you hooked thoughout the book and, although I had suspicions about who the ‘Hashtag Murderer’ was, I was surprised when the killer was revealed. The sub-plot concerning Freddie and Nasreen’s past was also intriguing and managed to fit in nicely with the main plot.

‘Follow Me’ really does make you think about your own social media habits and how much information users are making available to strangers.

I am pleased to see that this is going to be part of a series. Highly recommended.

I received this book from Net Galley in return for an honest review.

A Murderous Mind by Jane A. Adams

After a student is brutally killed in her own bedroom, the police soon make connections to a series of murders that have taken place over a number of years. Who is this killer who can kill with such ferocity whilst other people sleep nearby? It soon transpires that the now discredited Detective Inspector Joe Jackson had a suspect in mind but no arrest was ever made. Did he have the right man?

I have found this book difficult to review as I have mixed feelings about it. At the start, I found it very difficult to follow as I could not understand the connections between the numerous characters. As this book is part of a series, there were references to previous stories but not enough information was given for a first time reader to really comprehend what had happened. I soon found myself skipping sections of text which was not referring to the actual crimes or police investigation.

I am glad I continued with the book, however, as the plot was interesting and I was intrigued to find out if Jackson’s suspect was the correct one. I was slightly disappointed by the ending but, again, feel that if I had understood the characters more, the ending would have been more satisfying.

I received this book from Net Galley in return for an honest review.